Skip to content
Ensuring the safety of our patients and staff during COVID and revising our protocols as new developments arise.
LEARN MORE
Home » Patient Resources » Learning Center » Brain Anatomy

About the Human Brain

The brain is arguably the most important organ in the human body. It controls and coordinates actions and reactions, allows us to think and feel, and enables us to have memories and feelings—all the things that make us human.

While the brain only weighs about three pounds, it is a highly complex organ made up of many parts. Years of scientific study have made it possible for scientists to identify the various areas of the brain and determine their specific functions. The following information provides a brief description of some of the major parts of the human brain. 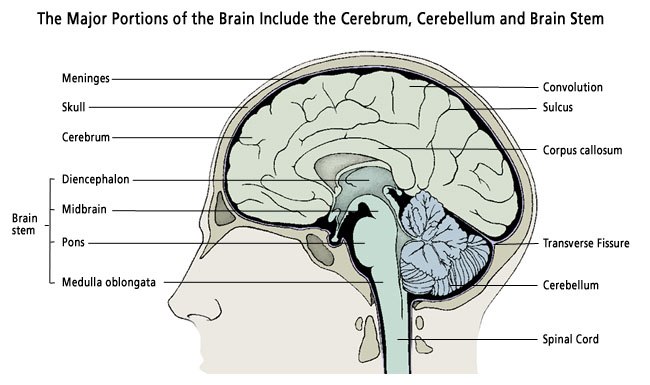 The Cranium: Covering of the Brain

The Cerebrum: Front Part of the Brain

The largest part of the brain, located in the front, is called the cerebrum. The cerebrum is responsible for:

The Brainstem: Middle of the Brain

The brainstem is located in front of the cerebellum. Think of the brainstem like a computer hard-drive. It is the body’s main control panel and is responsible for conveying messages between the brain and other parts of the body. The cerebrum, the cerebellum and the spinal cord are all connected to the brainstem. The brainstem has three main parts: the midbrain, the pons and the medulla oblongata.

The Cerebellum: Back of the Brain

Behind the cerebrum at the back of the head lies the cerebellum. In Latin, cerebellum means “little brain,” but the cerebellum actually contains more nerve cells than both hemispheres combined. The cerebellum is primarily a movement control center, responsible for:

Other Key Parts of the Brain

Ventricular System
The brain is not a solid organ. Instead, there are fluid-filled cavities within the brain called ventricles. The ventricles provide nourishment to the brain. The ventricular system produces and processes cerebrospinal fluid, a clear, watery substance flowing around the brain to cushion and protect it.

Learn More About the Brain

To learn more about the anatomy and function of the brain, take advantage of these reputable resources:

Princeton Brain, Spine & Sports Medicine knows that many of our patients like to research their condition and treatment
and look for useful resources on the internet. However, many find this a frustrating experience.

Princeton Brain, Spine & Sports Medicine is pleased to offer you a unique health and wellness search service for internet
information that:

What do you want to learn about?

Powered By The Circle of Health. Learn More

To discuss brain disorder symptoms or schedule an appointment with a Princeton Brian & Spine neurosurgeon, call our New Jersey offices at 609.921.9001 or our Pennsylvania office at 215.741.3141. For your convenience, you can also connect with PBSSM staff online.